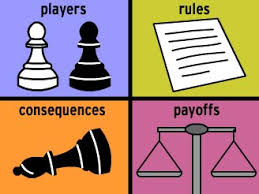 Game: A competitive activity involving skill, chance, or endurance on the part of two or more persons who play according to a set of rules, usually for their own amusement or for that of spectators (The Random House Dictionary of the English Language,1967).

A basic example helps to illustrate the point. After learning how to play the game tick-tack-toe, you probably discovered a strategy of play that enables you to achieve at least a draw and even win if your opponent makes a mistake and you notice it. Sticking to that strategy ensures that you will not lose.

This simple game illustrates the essential aspects of what is now called game theory. In it, a game is the set of rules that describe it. An instance of the game from beginning to end is known as a play of the game. And a pure strategy--such as the one you found for tick-tack-toe--is an overall plan specifying moves to be taken in all eventualities that can arise in a play of the game. A game is said to have perfect information if, throughout its play, all the rules, possible choices, and past history of play by any player are known to all participants. Games like tick-tack-toe, backgammon and chess are games with perfect information and such games are solved by pure strategies. But whereas you may be able to describe all such pure strategies for tick-tack-toe, it is not possible to do so for chess, hence the latter's age-old intrigue.

Games without perfect information, such as matching pennies, stone-paper-scissors or poker offer the players a challenge because there is no pure strategy that ensures a win. For matching pennies you have two pure strategies: play heads or tails. For stone-paper-scissors you have three pure strategies: play stone or paper or scissors. In both instances you cannot just continually play a pure strategy like heads or stone because your opponent will soon catch on and play the associated winning strategy. What to do? We soon learn to try to confound our opponent by randomizing our choice of strategy for each play (for heads-tails, just toss the coin in the air and see what happens for a 50-50 split). There are also other ways to control how we randomize. For example, for stone-paper-scissors we can toss a six-sided die and decide to select stone half the time (the numbers 1, 2 or 3 are tossed), select paper one third of the time (the numbers 4 or 5 are tossed) or select scissors one sixth of the time (the number 6 is tossed). Doing so would tend to hide your choice from your opponent. But, by mixing strategies in this manner, should you expect to win or lose in the long run? What is the optimal mix of strategies you should play? How much would you expect to win? This is where the modern mathematical theory of games comes into play.

Games such as heads-tails and stone-paper-scissors are called two-person zero-sum games. Zero-sum means that any money Player 1 wins (or loses) is exactly the same amount of money that Player 2 loses (or wins). That is, no money is created or lost by playing the game. Most parlor games are many-person zero-sum games (but if you are playing poker in a gambling hall, with the hall taking a certain percentage of the pot to cover its overhead, the game is not zero-sum). For two-person zero-sum games, the 20th century¿s most famous mathematician, John von Neumann, proved that all such games have optimal strategies for both players, with an associated expected value of the game.

The power of game theory goes way beyond the analysis of such relatively simple games, but complications do arise. We can have many-person competitive situations in which the players can form coalitions and cooperate against the other players; many-person games that are nonzero-sum; games with an infinite number of strategies; and two-person nonzero sum games, to name a few. Mathematical analysis of such games has led to a generalization of von Neumann¿s optimal solution result for two-person zero-sum games called an equilibrium solution. An equilibrium solution is a set of mixed strategies, one for each player, such that each player has no reason to deviate from that strategy, assuming all the other players stick to their equilibrium strategy. We then have the important generalization of a solution for game theory: Any many-person non-cooperative finite strategy game has at least one equilibrium solution. This result was proven by John Nash and was pictured in the movie, A Beautiful Mind. The book (A Beautiful Mind, by Sylvia Nasar; Simon & Schuster, 1998) provides a more realistic and better-told story.

By now you have concluded that the answer to the opening question on competitive situations is "game theory." Aspects of all the cited areas have been subjected to analysis using the techniques of game theory. The web site www.gametheory.net lists about 200 fairly recent references organized into 20 categories. It is important to note, however, that for many competitive situations game theory does not really solve the problem at hand. Instead, it helps to illuminate the problem and offers us a different way of interpreting the competitive interactions and possible results. Game theory is a standard tool of analysis for professionals working in the fields of operations research, economics, finance, regulation, military, insurance, retail marketing, politics, conflict analysis, and energy, to name a few.

Saul I. Gass, professor emeritus at the University of Maryland's Robert H. Smith School of Business