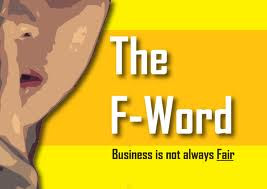 I have a colleague who works as the analytical practitioner and recently she was involved in banking project where they were analyzing free text data collected online.

The idea was to hear who is talking out there about this company,  what are they saying, how influential are the voices, what is the sentiment, what is the critical mass ad so on. Sure, we all like compliments, but to grow and improve nothing better than constructive criticism. In corporate world there are many areas to improve and if you want know where are these areas - just tap into an angry customer and see what fuels his anger.

So, next thing my colleague had done - was to use a technique called concept linking which takes selected word, in this case F-word, and produce a graphical display of the linkages between that word and other entities. And the thicker links would indicate a stronger connection between the words.

So, there she was, sitting with a senior bank manager who was probably dressed in a grey suit and tie,  using some neat technologies for linguistic exploration to find the most F–ed up areas of the business.  Isn't this just pure pragmatism! Basically - let’s see what are the customers most angry about before we see  if we can do something about it.

Next time someone throws expletive in your face – don’t get angry, try to learn from it!