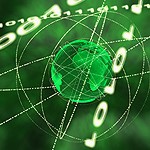 The massive amount of processing power generated by computer manufacturers has not yet been able to quench our thirst for speed and computing capacity. In 1947, American computer engineer Howard Aiken said that just six electronic digital computers would satisfy the computing needs of the United States. Others have made similar errant predictions about the amount of computing power that would support our growing technological needs. Of course, Aiken didn't count on the large amounts of data generated by scientific research, the proliferation of personal computers or the emergence of the Internet, which have only fueled our need for more, more and more computing power.

Will we ever have the amount of computing power we need or want? If, as Moore's Law states, the number of transistors on a microprocessor continues to double every 18 months, the year 2020 or 2030 will find the circuits on a microprocessor measured on an atomic scale. And the logical next step will be to create quantum computers, which will harness the power of atoms and molecules to perform memory and processing tasks. Quantum computers have the potential to perform certain calculations significantly faster than any silicon-based computer.

You don't have to go back too far to find the origins of quantum computing. While computers have been around for the majority of the 20th century, quantum computing was first theorized less than 30 years ago, by a physicist at the Argonne National Laboratory. Paul Benioff is credited with first applying quantum theory to computers in 1981. Benioff theorized about creating a quantum Turing machine. Most digital computers, like the one you are using to read this article, are based on the Turing Theory.

The Turing machine, developed by Alan Turing in the 1930s, is a theoretical device that consists of tape of unlimited length that is divided into little squares. Each square can either hold a symbol (1 or 0) or be left blank. A read-write device reads these symbols and blanks, which gives the machine its instructions to perform a certain program. Does this sound familiar? Well, in a quantum Turing machine, the difference is that the tape exists in a quantum state, as does the read-write head. This means that the symbols on the tape can be either 0 or 1 or a superposition of 0 and 1; in other words the symbols are both 0 and 1 (and all points in between) at the same time. While a normal Turing machine can only perform one calculation at a time, a quantum Turing machine can perform many calculations at once.

Today's computers, like a Turing machine, work by manipulating bits that exist in one of two states: a 0 or a 1. Quantum computers aren't limited to two states; they encode information as quantum bits, or qubits, which can exist in superposition. Qubits represent atoms, ions, photons or electrons and their respective control devices that are working together to act as computer memory and a processor. Because a quantum computer can contain these multiple states simultaneously, it has the potential to be millions of times more powerful than today's most powerful supercomputers.

This superposition of qubits is what gives quantum computers their inherent parallelism. According to physicist David Deutsch, this parallelism allows a quantum computer to work on a million computations at once, while your desktop PC works on one. A 30-qubit quantum computer would equal the processing power of a conventional computer that could run at 10 teraflops (trillions of floating-point operations per second). Today's typical desktop computers run at speeds measured in gigaflops (billions of floating-point operations per second).

Quantum computers also utilize another aspect of quantum mechanics known as entanglement. One problem with the idea of quantum computers is that if you try to look at the subatomic particles, you could bump them, and thereby change their value. If you look at a qubit in superposition to determine its value, the qubit will assume the value of either 0 or 1, but not both (effectively turning your spiffy quantum computer into a mundane digital computer). To make a practical quantum computer, scientists have to devise ways of making measurements indirectly to preserve the system's integrity. Entanglement provides a potential answer. In quantum physics, if you apply an outside force to two atoms, it can cause them to become entangled, and the second atom can take on the properties of the first atom. So if left alone, an atom will spin in all directions. The instant it is disturbed it chooses one spin, or one value; and at the same time, the second entangled atom will choose an opposite spin, or value. This allows scientists to know the value of the qubits without actually looking at them.

Quantum computers could one day replace silicon chips, just like the transistor once replaced the vacuum tube. But for now, the technology required to develop such a quantum computer is beyond our reach. Most research in quantum computing is still very theoretical.

The most advanced quantum computers have not gone beyond manipulating more than 16 qubits, meaning that they are a far cry from practical application. However, the potential remains that quantum computers one day could perform, quickly and easily, calculations that are incredibly time-consuming on conventional computers. Several key advancements have been made in quantum computing in the last few years. Let's look at a few of the quantum computers that have been developed.

Los Alamos and MIT researchers managed to spread a single qubit across three nuclear spins in each molecule of a liquid solution of alanine (an amino acid used to analyze quantum state decay) or trichloroethylene (a chlorinated hydrocarbon used for quantum error correction) molecules. Spreading out the qubit made it harder to corrupt, allowing researchers to use entanglement to study interactions between states as an indirect method for analyzing the quantum information.

In March, scientists at Los Alamos National Laboratory announced the development of a 7-qubit quantum computer within a single drop of liquid. The quantum computer uses nuclear magnetic resonance (NMR) to manipulate particles in the atomic nuclei of molecules of trans-crotonic acid, a simple fluid consisting of molecules made up of six hydrogen and four carbon atoms. The NMR is used to apply electromagnetic pulses, which force the particles to line up. These particles in positions parallel or counter to the magnetic field allow the quantum computer to mimic the information-encoding of bits in digital computers.

Researchers at IBM-Almaden Research Center developed what they claimed was the most advanced quantum computer to date in August. The 5-qubit quantum computer was designed to allow the nuclei of five fluorine atoms to interact with each other as qubits, be programmed by radio frequency pulses and be detected by NMR instruments similar to those used in hospitals (see How Magnetic Resonance Imaging Works for details). Led by Dr. Isaac Chuang, the IBM team was able to solve in one step a mathematical problem that would take conventional computers repeated cycles. The problem, called order-finding, involves finding the period of a particular function, a typical aspect of many mathematical problems involved in cryptography.

The Institute of Quantum Optics and Quantum Information at the University of Innsbruck announced that scientists had created the first qubyte, or series of 8 qubits, using ion traps.

Canadian startup company D-Wave demonstrated a 16-qubit quantum computer. The computer solved a sudoku puzzle and other pattern matching problems. The company claims it will produce practical systems by 2008. Skeptics believe practical quantum computers are still decades away, that the system D-Wave has created isn't scaleable, and that many of the claims on D-Wave's Web site are simply impossible (or at least impossible to know for certain given our understanding of quantum mechanics).

If functional quantum computers can be built, they will be valuable in factoring large numbers, and therefore extremely useful for decoding and encoding secret information. If one were to be built today, no information on the Internet would be safe. Our current methods of encryption are simple compared to the complicated methods possible in quantum computers. Quantum computers could also be used to search large databases in a fraction of the time that it would take a conventional computer. Other applications could include using quantum computers to study quantum mechanics, or even to design other quantum computers.

But quantum computing is still in its early stages of development, and many computer scientists believe the technology needed to create a practical quantum computer is years away. Quantum computers must have at least several dozen qubits to be able to solve real-world problems, and thus serve as a viable computing method.